Prior to attending UK, Rachael recieved her B.A. in Politics from Centre College. 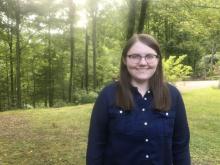