Alex Denison is a PhD and Visiting Assistant Professor at Miami University in the study of judicial politics, law, political behavior, and American institutions. He is previously a Visiting Lecturer in the Department of Political Science at the University of Georgia teaching constitutional law and American government.

A journalist by training, Alex worked in media for several years as a television reporter and anchor, news editor, radio host and columnist. Much of his research now focuses predominantly on the media's role in capturing Supreme Court activities and the subsequent effects these portrayals have on public perceptions of the Court. His dissertation work examines the relationship between the judiciary, the news media, and the general public, analyzing how judicial behavior and professional biases affect news coverage, and consequently, public attitudes toward the institution. Utilizing unique datasets of news articles covering decisions and confirmation hearings, Alex's dissertation identifies trends in coverage that question both the media's ability to provide responsible coverage of the institution that bolsters democratic ideals, as well as ways in which justices and political actors can affect coverage.

Recent research projects include co-authored studies (with UK professors Dr. Justin Wedeking and Dr. Michael Zilis) into how Supreme Court justices' negative rhetoric in opinion content shapes news coverage of decisions, and whether news content adequately emphasizes the content of opinions. Alex's current ongoing projects, including his completed dissertation, focus on how judicial behavior and news bias contribute to politicized portrayals of the Supreme Court. Other research includes how race affects disparate perceptions of political freedom and constitutional protections in the U.S., media focus on dissenting opinion work and individual justices, as well as new research interests in judicial interactions and interventions in professional sports. His broader research interests include the impact of political rhetoric, political psychology, and the implementation of judicial policies. His research can be found in Social Science Quarterly, Michigan State University Law Review, and Elon Law Review, as well as co-authored chapters for editions of The Oxford Handbook of Political Representation in Liberal Democracies and The Conservative Revolution of Antonin Scalia. 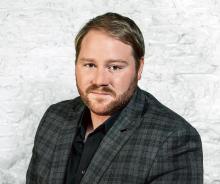